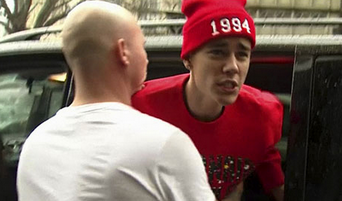 I’m your new publicist. It is now my job to  manage and protect your brand to keep it in a positive light among the public.  I understand you are young, but you are also a hugely successful Pop Star being watched by everyone. So, it seems we have a few things to discuss.

You’ve been in the media quite a bit lately. Congratulations! Unfortunately, in your case the press you’ve been receiving is nothing close to good press. Type your name into Google and it looks like you’re in a downward spiral transformation into a celebrity has-been. According to celebrity photographer, Tyler Shields, you’re looking to be the next Vanilla Ice. Yikes!  We better get a move on things, don’t you think?

1. Focus on the Music – You are where you’re at today because of your voice and musical talent. Music is the number one thing we’re going to focus on; our top priority. Your album, Journals, just released in December. It’s a really great album. I listened to it, so I know. However, it flopped. It did not do well. Why? Because when it was released you were not focused on the music. You were out making the tabloids in a negative way which in turn overshadowed your release.  Put your music first!

Lets take your ow advice, shall we?

2.  Cool It with the Ladies – Remember those allegations that you were the father of a women’s child or those pictures that were leaked of you sleeping? Many of these issues could have been avoided if you weren’t frolicking around with a bunch of different women. Have respect for yourself AND these women. P.S. Selena is never going to take you back if this behavior continues . It’s not cute.

3. Keep Those Who Care Around –  You have to know that there are people who truly care about you and your well-being. Listen to what they have to say and consider taking their advice. Firing your security because they were concerned about your behavior was not a good move. It’s obvious that they were just looking out for you like Security is supposed to. These people will help you stay focused on what is important. Also, consult with me or Scooter before you fire someone.

4. Priorities – Is it more important to you to help those less fortunate than you or to spend thousands at a strip club? If you truly enjoy the philanthropy work that you do, which I think you do, lets continue to do it. I’m going to tell you now that this nonsense with your friends needs to stop. Go play some paintball instead of egging our neighbors house. What we will NOT do is try to mask your mistakes with your philanthropy work.  So, you better start thinking before doing.

5. Cut the Crap – If you truly are doing drugs, stop it right now. Do you know how many careers and lives have been lost because of drugs? You’ve worked hard to get this far, don’t lose it because of a temporary high. If your friends are going to live with you, they must know that their will be no tolerance for drugs.  If this becomes a bigger issue, I’m bringing in a crisis manager and you will not enjoy it.

6. Ignore the Paparazzi – Yes, they are annoying and can get out of line at times but you need to take a deep breath and carry on. Walk away from the situation and do not lunge at them. I think after the incident, you realized you should have not reacted the way you did. You realized you gave them exactly what you wanted. Take that experience and learn from it.

PS. Melissa Victor… If you need help, I’ve got you girl.

2 Replies to “If I Were Justin Bieber’s Publicist”