It was just a normal day. I had just got home from working a promotion and I realized that it was the day of Kim Kardashian and Kanye West’s wedding! Naturally, I went to Twitter. Browsing through the #KimyeWedding feed I saw that a photo of  Kim had been released (leaked). Being the Kardashian fan that I am, I found the best quality version of the photo I could and shared it with my followers saying, “Kim Kardashian’s wedding dress. Dying to see what it looks like from the front. #KimyeWedding.” I sent the tweet and continued to scroll through the timeline and then going about the rest of my day.

1. Anyone can incorporate your tweet onto their website or in an article and they don’t have to tell you.

A little later after sending the tweet, a follower informed me that HuffPost Celebrity had featured the tweet in their latest article covering the Kimye Wedding. She had asked if I knew and in fact, I did not! Friends and followers soon began to inform me of other articles I had been featured in along with a second Huffington Post link and sites that weren’t even in English.

They can also take it down without telling you. My tweet is no longer featured as after I realized what had happened I took to twitter to share that I did not take the photo nor did I own the rights.

2. Many sites steal and snag information from other sources online.

Once the Huffington Post used my tweet in two of their articles, my tweet and name began to pop up in MANY other online outlets! Just google my name with Kim Kardashian’s and you’ll see pages of results.

Not only were these outlets incorporating my tweet but some of them were even using Huffington Posts actual written content! I realize there may not always be a lot of information to work with, but I think you could whip up something in your own words for goodness sake.

The day my tweet was shared and kind of went viral, my Twitter notifications went through the roof from retweets to follows to tweets both kind and not-so kind. I ended up gaining almost 800 new followers! My original #KimyeWedding Tweet was retweeted 226 times and favorited 174 times. After I found out about my tweet being featured, I shared the link with my followers and that somehow accumulated 215 retweets and 585 favorites without the use of a hashtag. Both tweets are still being retweeted and/or favorited but nowhere near the capacity it started. My Klout score increased one point making it a 67. 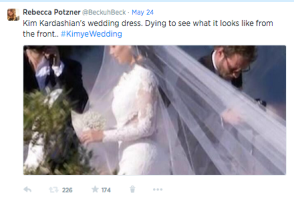 4. People don’t always do their research.

One of the websites that featured my tweet introduced the photo with the line, “According to a PR rep named Rebecca Potzner, it looks something like this…”

While I’m flattered, I’m not Kim or Kanye’s PR Rep. (But, If you two are reading this… I’d love to take on that position!) All of these outlets assumed that I was a reliable source because Huffington Post featured it first. That particular source tried to do SOME research and read in my Twitter bio that I’m in PR. Good job but not really. I was also cited for sharing the photo via Instagram when I actually shared it on Twitter. Double-check people, double-check.

5. People want to be the first to report everything

This one goes along with number 4. Everyone is rushing to get the information out before the next person, but they aren’t focusing on keeping their content correct or really of quality. Yes, you may be a minute or two behind another publication but you’ll have GREAT content that people can trust and will want to read. Plus, you won’t have to back track and fix what you messed up.

6. There are many people out there who need to get a life.

This is where I give major kudos to all celebrities, leaders, and influencers. I received an abundance of negative, rude, and nasty replies from both my tweet about Kim’s dress and my tweet sharing that I was featured in HuffPost. Some asked why I cared, others said marriage is more than just a dress, and others slung profanity at me and about Kim.  I’ve honestly never wanted to willingly turn off my data until that weekend. The negativity was a downer and it flooded over the content I wanted to read and the people I wanted to interact with.

It blew me away that people were ok with sending such hurtful words to someone they don’t know and to waste their time on something they apparently don’t care about. There is absolutely no need for this hate. It’s pointless and to judge someone off of a simple tweet is just preposterous.