One of the best parts of watching an awards show is the live tweeting. We can interact with people from around the country and read their opinions and experiences on the event. If you have a live feed going of the hashtag for the event, you’ll notice it becomes flurry from the constant flow of tweets. There are some tweets that tend to stand out and that’s because they aren’t a person, they are a brand. These types of accounts aren’t usually very active  during these large events. Below are five brands that I thought used their Twitter accounts wisely during the 56th Grammy Awards.

Viewers  were quick to notice that Pharrell Williams hat looked very similar to the Arby’s hat and so was the fast food restaurant. Although this was the only tweet they sent out during the program, I think that’s all they needed to do.

Gain has been linking their new products to music more recently,  The brand continued this plan and worked it well. However, I found their best tweet to be the one below. Way to tap into what everyone on Twitter was talking about and thinking fast. I’m curious as to how they got a hat so similar in such a timely manner! 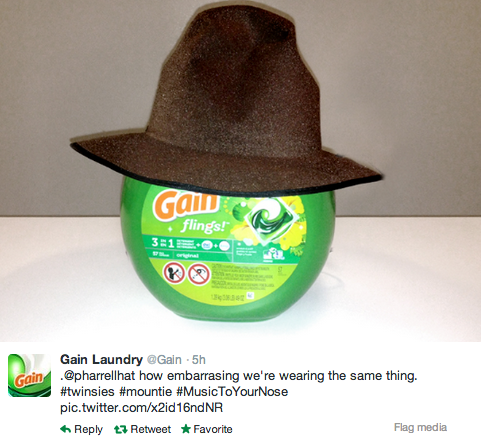 Not only was VH-1 keeping up and live-tweeting the awards show, but they were quick to jump on the trendy-ness of a certain hat! Giving their logo a new look, the television station plopped Pharrell’s hat on top of their logo. They followed up the change of their avatar with a few quirky tweets to point it out. Tweeters found it hilarious.

Oreo is no stranger to using Twitter during large-scale events. Remember last years Super Bowl blackout? This was a little different but smart, nonetheless. The brand sent out a tweet telling their followers to watch out for their new commercial. The commercial shared a hashtag that gave Twitter users a chance to have the new Oreos shipped to their house! Not only was I noticing Oreo’s tweets, but I was noticing everyone tweeting them the hashtag to receive the URL to sign up for the free cookies. This was great planning on timing for the brand. They knew more people would be watching TV and on Twitter due to the Grammy Awards. Bravo Oreo! Can’t wait to taste the new flavors. 🙂 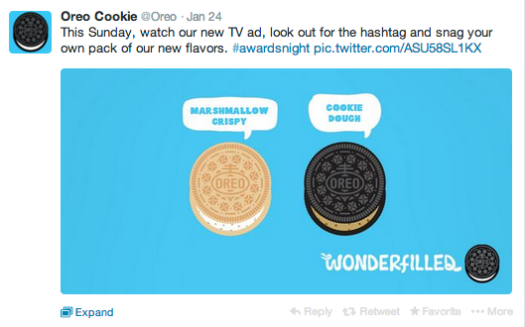 It’s pretty easy to have fun with pizza. DiGiorno stepped up the fun and tweeted all throughout the awards show. One tweet asked how the men of Daft Punk would eat pizza with their helmets.

One Reply to “Brands that Rocked the #GRAMMYs Twitter Timeline”