On September 29, College students headed to The Number Fest up at Ohio University in Athens. Usually held in the spring, the alcohol drenched music festival was moved to the fall due to the University’s switch to Semesters.

Held in a huge field surrounded by trees, an estimated 15,000 students drank, danced, socialized, and raged from noon to night in front of a large stage. The stage hosted both local and big name artist, including; Krewella, 3LAU, Coyote Kisses, DIGIRAATII, Vada, P.Blackk, Cal Scruby, CJ the DJ, Hawkeye, Dave Rave, and a few more.

Although there was plenty of room on the field, attendees stayed clumped together in front of the stage. With beer showers (no champagne, here), and confetti spewing off the stage, it was easy to see attendee’s were enjoying the music and company. “The atmosphere is unreal, the music is always great and it’s always something I talk about for months afterward.” Said, Alex Donald a FEST attendee from Cincinnati.

SelfDiploma’s own DJ ETRAYN provided the beats for Cincinnati raised and Columbus educated, Cal Scruby. Hyping up the crowd, Scruby performed songs from his newly released mixtape, Boy Genius. If not on stage during Cal Scruby’s set, you could find him and ETRAYN crowd surfing; something ETRAYN likes to do often.

Speeding through the VIP area on a packed golf cart, Krewella jumped off the cart and onto stage to drop their set. Although they showed up almost an hour late due to flight delays, the Krew went hard and threw down heavy beats from their new EP, Play Hard, which earned a top 10 spot on iTunes shortly after the release.

Following Krewella, 3LAU put on a sick set with some of his own mixes. If you didn’t think the crowd was rowdy, you would’ve thought differently after 3LAU. His high-energy music mixed with lights and smoke got the crowd into a groove.

Juicy J was originally one of the headliners in the line-up, however he cancelled last-minute due to an invitation to perform at the BET Awards. Can’t get mad at him for an opportunity like that! TheNumberFest/Prime Social Group acted quickly on their feet and booked Curren$y to take Juicy J’s spot. Curren$y rolled into Fest with a big posse and put on a show that the whole crowd enjoyed. 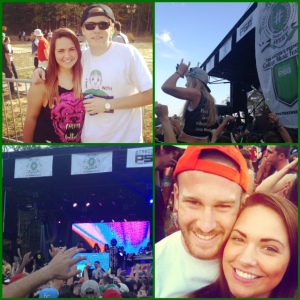